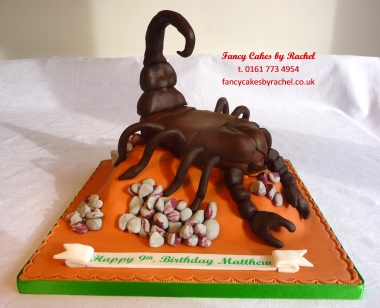 Here is the scorpion cake, I hope you like it.

The body of the scorpion is not very big and there would not have been enough cake to eat so I baked 2 cakes and shaped one to resemble a sand dune and the other was carved into the shape of the scorpion's body.

A large quantity of chocolate was used to make this cake and I rather think it would have been even more delicious than usual.

Next week I will be making a Fiat 500

Back To Blog
Close
Close